The antenna and equipment pages on this site has been updated this evening. Have a look and say what you think! Also, I created a new page dedicated to ultralight DXing only, where you among other things will find my complete ultralight DX log from March to April this year.

Ok, so here it is. Compared to the system used last season, the two loops will have a somewhat larger curcumference. On each loop the HDLA-amplifier/matching unit will be connected in the lower apex facing the desired listening direction. In my case, I want to favour reception from northwest and northeast and everything in between. In the lower apex of each loop, facing undesired directions, a 1 KOhm terminating resistor is connected. This will (hopefully) attenuate noise from nearby buildings and unwanted signals and QRM from southwest and southeast.

As you can see, the system can be defined as two phased KAZ-loops. Both loops are mounted on the same pole, in 90 degrees angle from eachother. This is far from ideal, but due to lack of poles and real estate, I don’t have any other choice than to do it like this right now. The loops are, however, separated in height. I do have high hopes for it’s performance the upcoming MW-season. But, just like all other antenna systems – this one demands real life usage in order to prove it’s useability. In any case, I’ll keep you posted about the assembly process. Just wish them horses to leave the spot where I’m planning to erect this “thingy”.

Alive and kickin’ – and preparing for next MW-season! 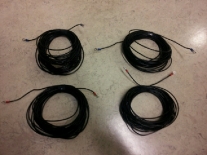 Yes! I’m still around! It’s still sort of summer up here (actually, with “summer” I mean “non-MW-season”), but we’re definetely getting closer to the next season of darkness – and DX:ing! A lot has happened since my last post here and, among other things, I’m now settled permanentely here in Vardø. Right now I’m preparing my antennas for the next season, and I will modify my phased HDLA-loops a bit – trying a pair of phased KAZ-loops, which I beleive will be able to fight local QRM a little bit better than my previous setup. As you can see in the picture, the loop wires are cut and as soon as the horses that now are populating the area where I’m planning to erect the antenna are gone – I will put the antenna up. A schematic diagram of the modified HDLA-loops will be published here within a few days.

During “pre-season”, I’m planning to update the blog two to three times per week, and when the season has started in september, my ambition is to update on an daily basis.

By the way: please note that I’m now using a new e-mail adress for DX-related correspondance:

I have been inactive the last week, and not been listening at all, due to very windy weather conditions just after the last weekend. The storm made spaghetti of my BOG’s at work and my HDLA’s at home, so I decided to usemost of my spare time last week to repair the HDLA’s and re-locate them to my listening post at work. I have winded up the BOG’s and put them in the trunk of the car, so they are now ready for some portable action. Anyway, I assembled my HDLA’s two days ago and they seem to work fine.

Unfortunately, the sun hasn’t been very coorporative this weekend. Conditions is currently useless and there is no transpolar propagation at all on the MW band. This morning proton levels went up and down, and up again. The MW-band was totally dead, except for the semi-local russian stations.

Was listening on shortwave for a while, but there was absolutely nothing of interest. Well, maybe it was Radio Educación in Mexico playing canciones on 6184,9 KHz, but it was very weak and unstable. Besides that, nothing. And auroral flutter on almost every signal that was heard.

So, today I will relax and do some audio file analyzes. It will take a few days for the MW-band to recover, and hopefully better conditions will be present later this week and next weekend.

NB: I have updated the antenna page on this site. There you will find a more detailed description of my HDLA-system.

Yes! My HDLA loop amplifiers / matching units and bias-tee:s for supplying the amplifiers with +12V via the coax has finally arrived! I have attached the HDLA:s on my loops tonight, in complete darkness by the way, and the arrangement seems to work fine! Conditions into Asia seems fine also tonight, and I hope that it finally will open up also to North America tonight / tomorrow morning.

Anyhow, the amplifiers seems to have a very nice gain, and the antennas seems to be very quiet, QRM-wise, which is a huge difference from the mismatched arrangement I was using until this evening. The specs for the HDLA is said to be equal or better to the Wellbrook ALA-100, but I have no possibility to do a side-by-side test between the HDLA and ALA-100. However, for the same cost as for one ALA-100, I got two HDLA’s, so I’m happy with that – sofar!

I will have a “listen around” this evening and I get back later on with some more about my “new” antenna arrangement.

Ok. First of all: I’m very sorry for the lack of updates in the blog, but now I promise to update at least once per day when I’m up here. Well, I arrived in Vardø August 29, and decided to check the MW-band immedeately. Mostly to find out if there is any loca

l QRM-sources, and yes, there is. A few plasmas and other noise generating stuff is present, but the situation is not nearly as bad as it is in my home QTH in Biri. I used my ICF-2010 with the ferrite rod only and around 21 UTC I found Family Radio, Taiwan, on 1557 KHz with local strength. Promising? Yes!

On September 3, I erected my portable mast, populated with two 25-meter delta loops. One in NW-SE and the other one in NE-SW. Both loops are just balun-fed, as my HDLA amplifiers and Bias-Tee:s are not to be delivered until mid-october. Never mind, I will be on a business-trip between September 19 and October 17 anyway, hi! The loops are phased by means of my MFJ-1026, and the arrangement seems to work ok, but it’s far from optimal. Well, when the HDLA’s arrives it will be an easy task to hook them to the loops and then everything should be “swell”.

I´ve been listening for two evenings and early mornings now. Sofar nothing from North America. Guess that conditions are pretty disturbed right now, as stations in the Middle East (and especially Iran) is coming in with enormous signals from time to time. However, a few nice stations in the Far East, such as JOLF Tokyo on 1242 KHz, All India Radio Rajkot on 810 KHz, All India Radio Jalandhar on 873 KHz, V o Kuanghua Hsinfeng (TWN) on 981 KHz and TWR Puttalam on 882 KHz are now in the log, as well as some other Chinese and Iranian stations. I was especially pleased to log JOLF already the first evening with my “mismatched” loops – which prooves that the system is theoretically working, and most likely will work even better with the HDLA amp’s connected. Anyhow, JOLF was my first japanese station on Mediumwave and the occasion was celebrated with a glass of Single Malt, hi!

Tonight I will try to improve the feeding of the loops, then it will be a few hours of listening during the evening. Will be back tomorrow with more updates!

HDLA – The antenna(s) of my choice

At first, I planned to erect two Wellbrook ALA-100 loops at my QTH,

but after I got a hint in one of the later editions of Shortwave Bulletin about a german antenna that has similar specifications and is said to perform equally (or in some cases better) than the ALA-100, I immedeately got curious and decided to find out more. The antenna, or more correct; loop amplifiers (you supply your own antenna wire for the loop), is called HDLA and can be bought from Dirk Nees Elektroniek via the internet site activeloop.de. The cost for one loop amplifier and BIAS-tee for supply-voltage via the coaxial cable is very sympathic; 110.00€, if you place your order before the 1st of July (2011). After that, the price will be 135.00€ (which also is very sympathic). The price doesn’t include shipping costs. However, at this price, you almost get two HDLA’s for the same cost as one ALA-100. Definetely worth a try, right?

My idea is to arrange two HDLA’s as delta loops on one support pole. Each delta-loop with a cirkumference of about 20 meters. Guess there will be some experimentation to find the optimal loop size. The loops will be arranged “K9AY-style”, with the exception that the loops will not be terminated. Instead I will phase the two loops by means of my MFJ-1026 phaser, which also covers the MW-band after a very simple modification. Hopefully these loops will work fine, and I sure hope that my final conclusion is that the HDLA represents the “best bang for the Buck”!